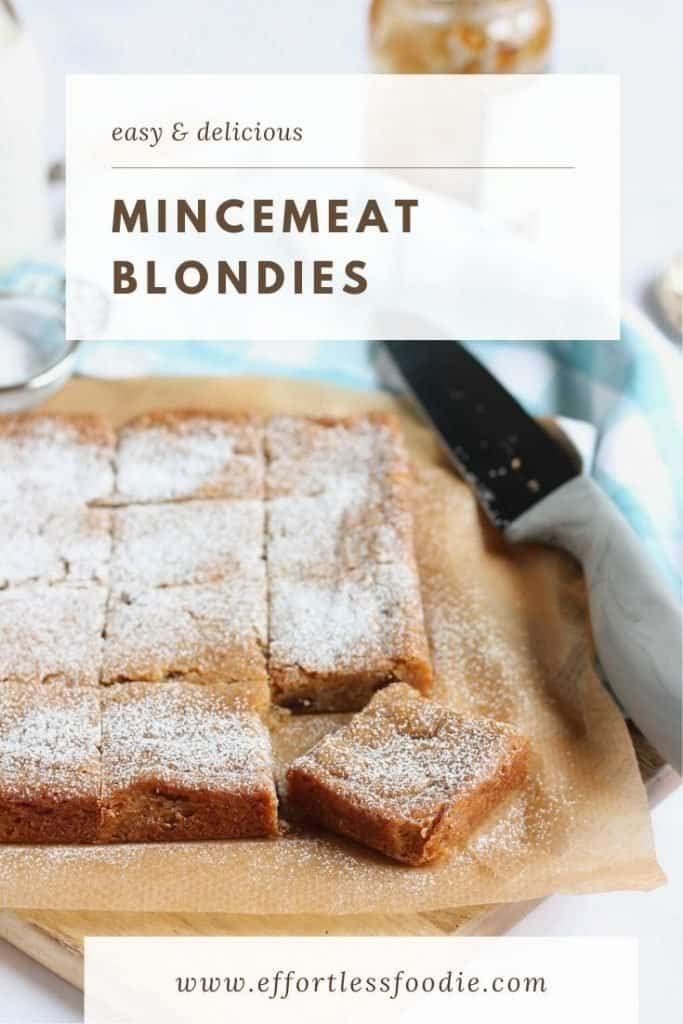 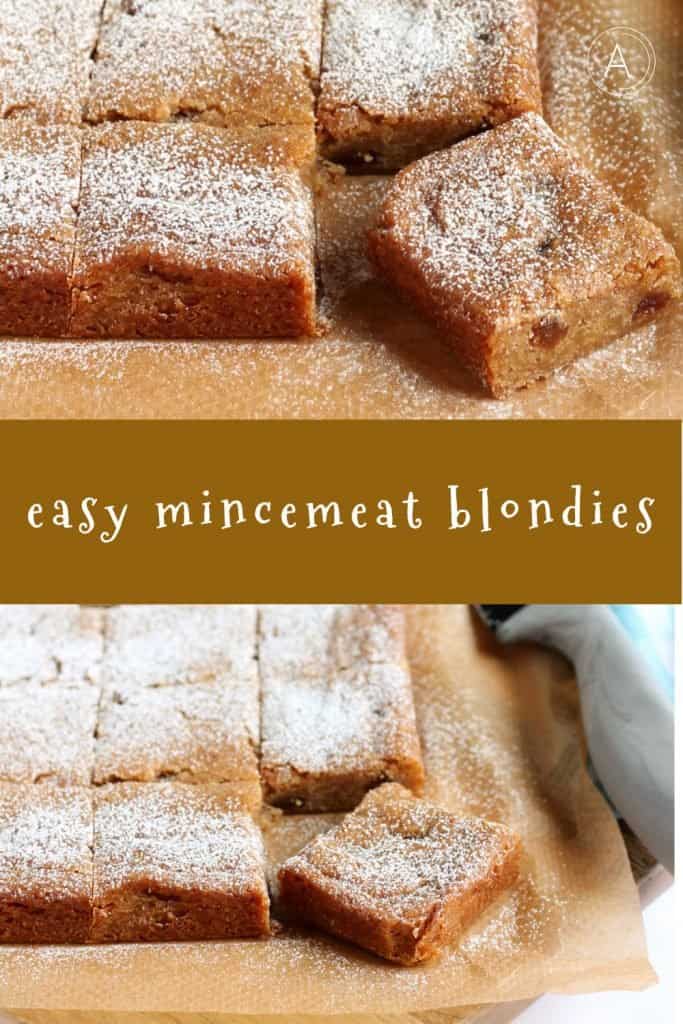 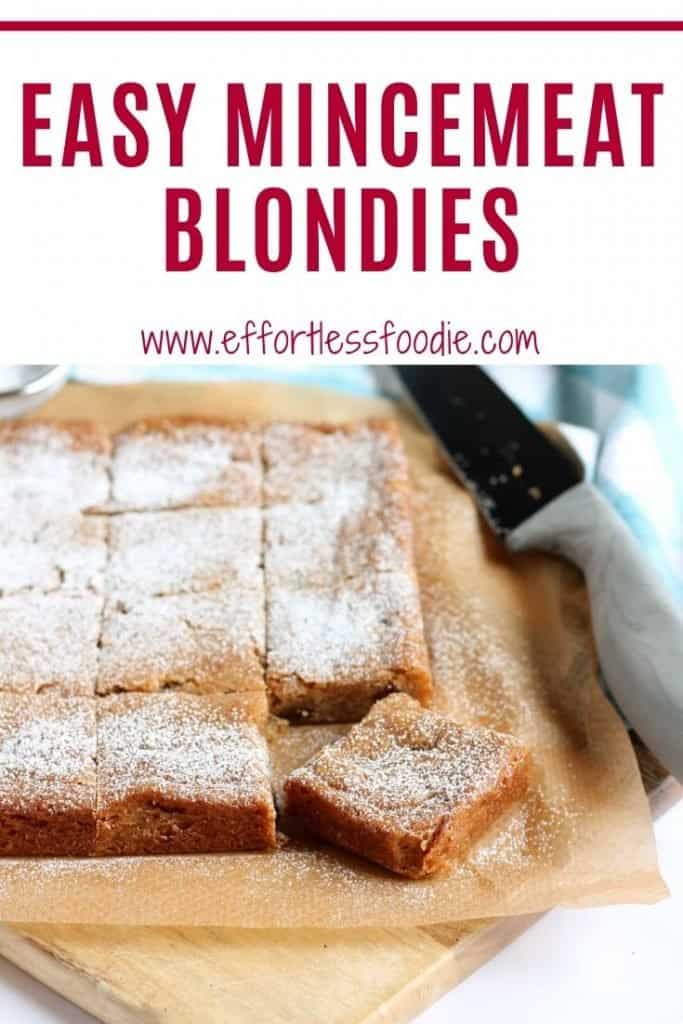 Festive fruity mincemeat blondies are an easy and delicious Christmas bake! You get to enjoy all of the flavours of a mince pie in blondie form, and it's also a great recipe for using up leftover mincemeat!

A real crowd-pleaser of a bake that can be enjoyed all year round. Serve as a dessert with clotted cream or for a festive tea-time treat with brandy butter.

Buttery, soft and fruity, and best of all, so simple to make! I love the festive flavours in these moist mince pie blondies!

One: Melt the butter in the microwave (I do this in 20 second bursts to avoid exploding butter accidents!), then beat in the light brown sugar, egg and vanilla extract.

Two: Mix in the salt, plain flour and mixed spice.

Three: Stir through the mincemeat and white chocolate chips if using.

Four: Spoon the blondie mixture into a 20cm square tin, lined with baking paper and bake in a pre-heated oven for 25 minutes.

I like to serve the mince pie blondies as a quick and easy dessert with clotted cream or my no-churn honeycomb ice cream. If you prefer, the blondies can be reheated in the microwave and served warm.

I always include these mincemeat blondies on my Christmas buffet table, along with my mincemeat muffins, M&M cookie bars, and honeycomb tiffin. They're also perfect as a mid-afternoon pick me up during the festive season and beyond!

Blondies are easy to customise based on your flavour preferences. Chopped nuts could be added to the mixture, or how about orange zest to make them extra-fruity?

If you can't get hold of mixed spice then use cinnamon instead.

The festive blondies will keep in an airtight tin or container for up to 5 days. Alternatively, they can be frozen for up to 3 months. Cut the blondies into squares once cool and place in a freezer-safe container, (separate each layer with baking paper so they don't stick together).

During Medieval times, mincemeat originally contained minced meat along with the fruit and spices. The modern version is a mixture of chopped dried fruit, spirits (brandy, rum or whisky) and spices such as cinnamon, cloves and nutmeg. Why not try adding it to an apple crumble?

What is the difference between a blondie and a brownie?

The main difference between a blondie and a brownie is chocolate! Brownies use cocoa powder and/or dark chocolate in the mixture, whereas blondies don't. Blondies are usually flavoured with vanilla and white chocolate.

If blondies are your thing, you might want to check out these easy blondie recipes too!

Tried this recipe? Leave a ⭐⭐⭐⭐⭐ star rating in the comments!

Variations:   Storage The mince pie blondies will keep for up to 5 days in an air-tight container. They can also be frozen for up to 3 months. Wrap in baking parchment and place in a freezer-safe container.   Nutrition The nutritional information provided is approximate and is calculated using online tools. Information can vary depending on various factors, but we have endeavoured to be as accurate as possible.
Nutrition Facts
Fruity Mincemeat Blondies
Amount per Serving
Calories
162
% Daily Value*
Fat
5
g
8
%
Saturated Fat
1
g
6
%
Cholesterol
11
mg
4
%
Sodium
82
mg
4
%
Potassium
44
mg
1
%
Carbohydrates
28
g
9
%
Fiber
1
g
4
%
Sugar
19
g
21
%
Protein
3
g
6
%
Vitamin A
19
IU
0
%
Vitamin C
1
mg
1
%
Calcium
30
mg
3
%
Iron
1
mg
6
%
* Percent Daily Values are based on a 2000 calorie diet.
Tried this recipe?Snap a pic and tag @effortlessf00d on Instagram or Twitter