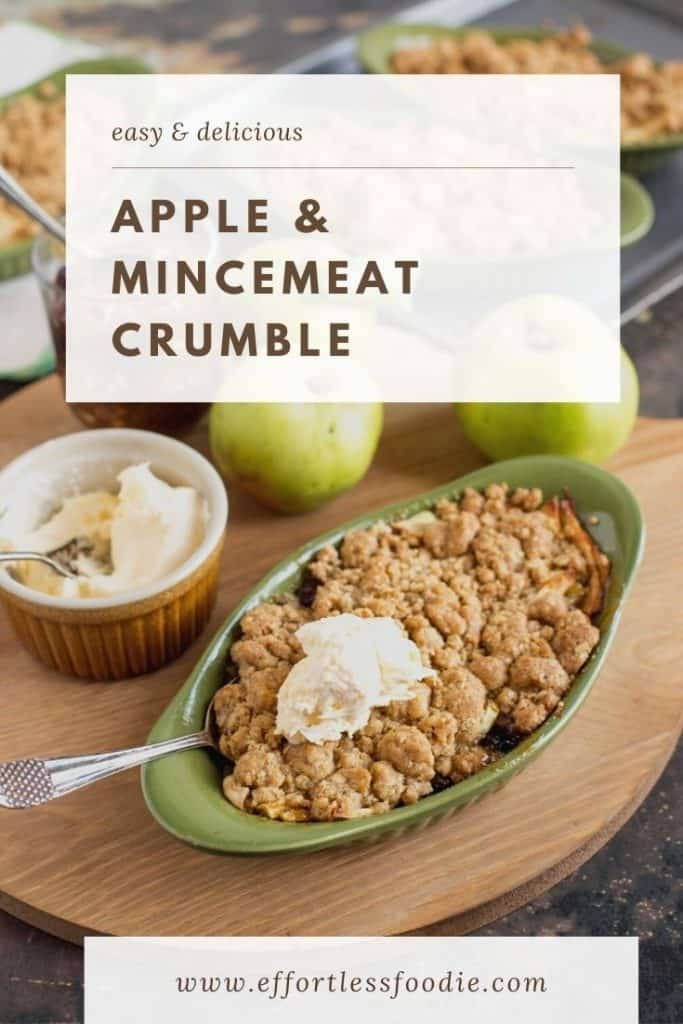 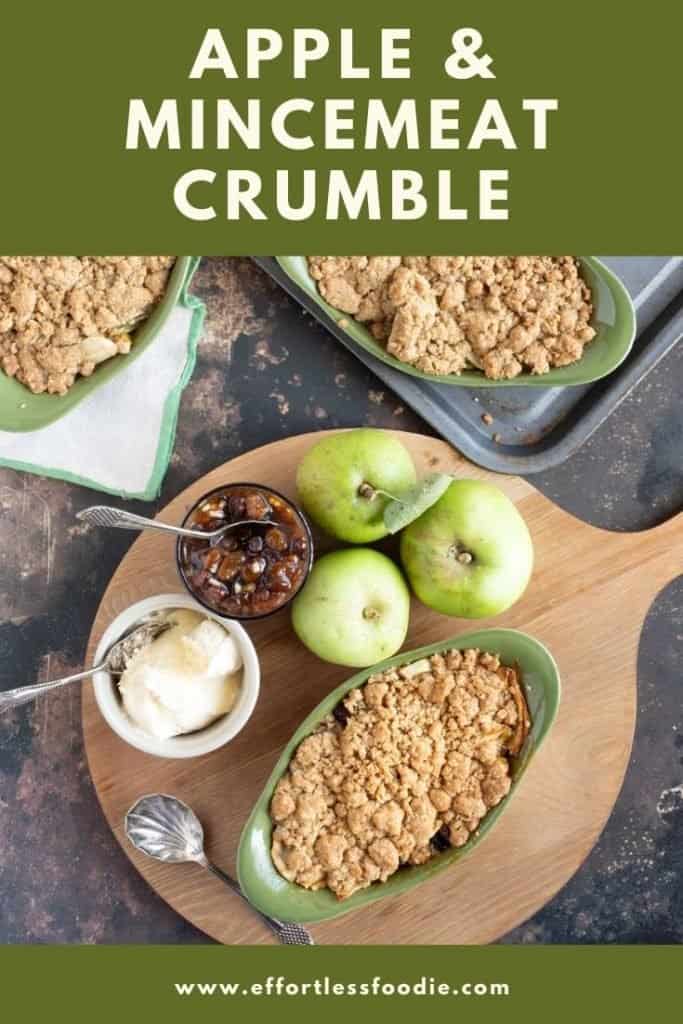 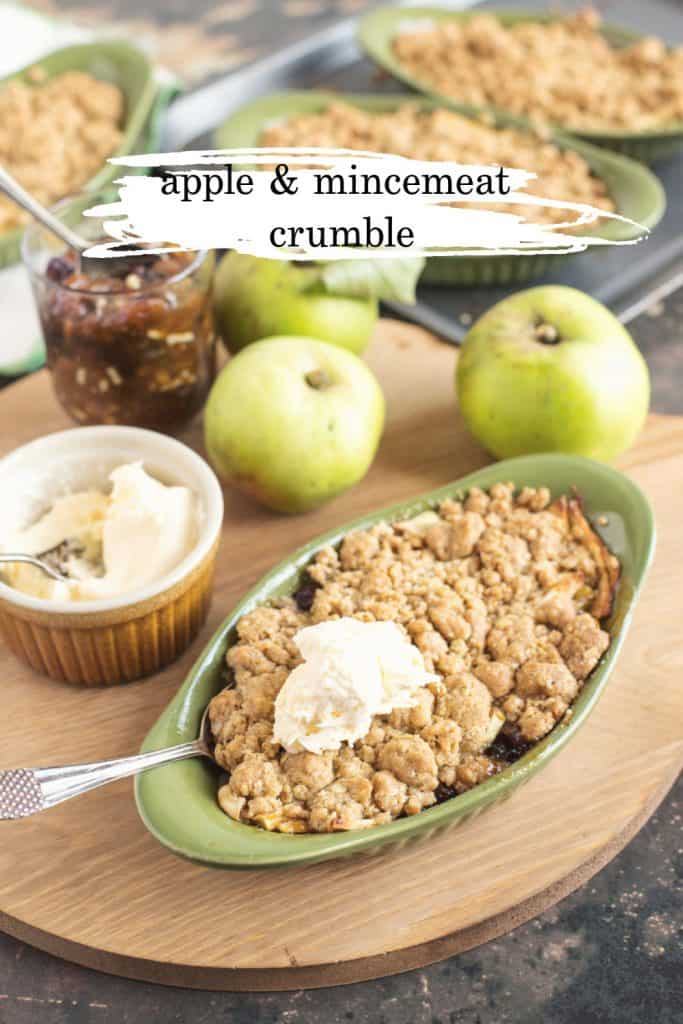 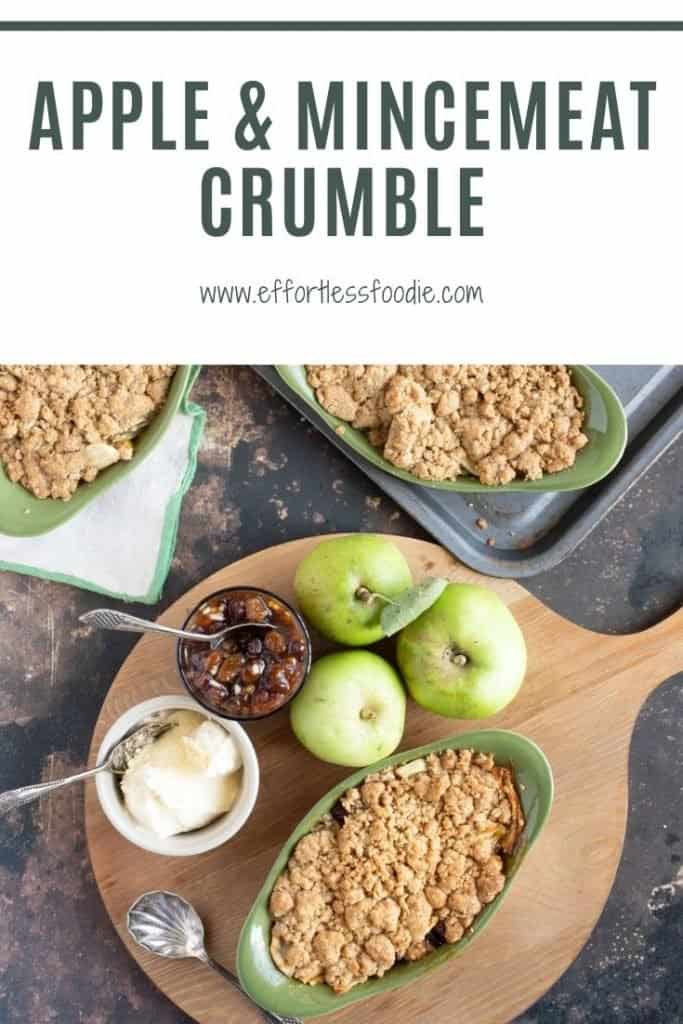 It's a great way of using up leftover mincemeat, but best of all it's a simple and delicious festive dessert that everyone will love, especially with a dollop of clotted cream on top!

I don't know about you, but I always seem to accumulate half-used jars of mincemeat from making crumble-topped mince pies, mincemeat muffins, and mincemeat pinwheels at Christmas.

This apple & mincemeat crumble is the perfect way to use it up, and although it can be enjoyed all year round, it's particularly good during autumn when the Bramley apples are ready in season.

It's also a delicious alternative to Christmas pudding during the festive season.

One: Peel and slice the apples and place them in a large bowl. Mix in the mincemeat, sugar, cinnamon, and water.

Two: Make the crumble topping by placing the dry ingredients in a large bowl. In a separate bowl, melt the butter (20-second bursts in the microwave).

Three: Pour the melted butter over the dry ingredients and stir until crumbles form.

Four: Spoon the apple mixture into 1 large pie dish or 6 individual serving dishes. Sprinkle over the crumble topping and bake for 45 minutes until the top is golden brown.

The crumble is delicious with a dollop of clotted cream, whipped cream, or no-churn honeycomb ice cream. It's also lovely with creamy custard if you prefer something warm.

I often serve it up as an additional pudding on Christmas Day, for those that don't like traditional Christmas pudding. Don't forget the brandy butter!

I've even eaten it for breakfast on Boxing Day with Greek yogurt!

Make-Ahead: The crumble can be made up to the point of baking and then stored in the fridge for up to 2 days.

Store: Leftovers can be stored in an airtight container in the fridge for up to 3 days.

Reheat: The mincemeat crumble can be reheated in the microwave or oven (200c for 15 minutes). It can also be eaten at room temperature, or straight from the fridge!

Freeze: The crumble can be frozen for up to 3 months. Wrap tightly in two layers of foil to prevent freezer burn. Defrost at room temperature before reheating.

During Medieval times, mincemeat originally contained minced meat along with the fruit and spices. The modern version is a mixture of chopped dried fruit, spirits (brandy, rum, or whisky), and spices such as cinnamon, cloves, and nutmeg. 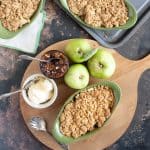 For the crumble topping

Nutrition: The nutritional information provided is approximate and is calculated using online tools. Information can vary depending on various factors, but we have endeavoured to be as accurate as possible. Substitution: Please note you can substitute the oatmeal for extra oats in the recipe.
Nutrition Facts
Apple and Mincemeat Crumble
Amount per Serving
Calories
466
% Daily Value*
Fat
11
g
17
%
Saturated Fat
1
g
6
%
Sodium
289
mg
13
%
Potassium
109
mg
3
%
Carbohydrates
87
g
29
%
Fiber
3
g
13
%
Sugar
55
g
61
%
Protein
8
g
16
%
Vitamin A
11
IU
0
%
Vitamin C
1
mg
1
%
Calcium
80
mg
8
%
Iron
3
mg
17
%
* Percent Daily Values are based on a 2000 calorie diet.
Tried this recipe?Snap a pic and tag @effortlessf00d on Instagram or Twitter